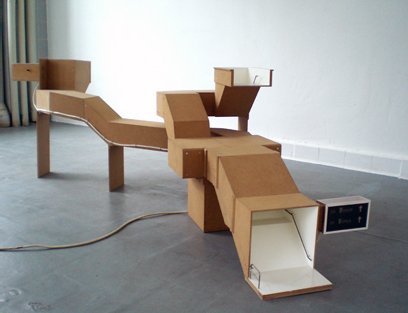 The current show at Wendt + Friedmann Galerie, entitled Everybody Knows This is Nowhere, reflects upon the experience of living in a foreign country, surveying the work of eleven international artists living and working in Berlin, and one German artist now based in New York. As such it was in part a survey of ‘here’ (Berlin/Germany), looked at from a position of those in motion towards it (spatially/culturally), with many of the eleven non-German artists deploying different artistic strategies of orientation to embed themselves within their new home.

David Keating and Larissa Fassler are two artists in the show which utilise methodologies of tracing and re-drawing as familiarisation aids. Keating’s work was simple, the presentation of two large sheets of paper, one of which was a page from a local German newspaper, while the other was a precisely executed ink and watercolour replica, but with all the text translated into English. Made physically manifest here is the process of reading a foreign language text with which you are familiar, morphing it in your mind as you read into the language of your mother-tongue. The replica Keating manufactures represents the ‘silent voice’ that runs at the back of our minds as we read, we translate, or we compose a text.

Fassler’s sculptural work appeared to be a simplified, scale-model depiction of a series of conduits or tunnels. The exhibition text confirmed my guess that it represented a subway tunnel, more particularly the various entrance stairwells of the ‘Hallesches Tor’ U-Bahn station. The artist re-built this purist model of the spatial aspects of the station’s complex arrangement of entrance spaces after first engaging on a programme of her own measurements and observations of the real space. This slightly obsessive act of observation and familiarisation reflects also a less intense, but no less satisfying, desire to have mastery of the local transport system, as a badge of success in making a new city your home. My near total appreciation of this work (both sculpturally and conceptually) was undermined slightly by the unnecessary addition of a small digital clock display (representing train times) and recorded sounds (of the station itself I imagine), which served to point the work towards theater.

Both artists deploy stategies of drawing as methods of incorporation, taking elements of the unfamiliar new spaces and cultures, analysing them and representing them according to their own methods of control. Keating’s drawing displays in a very literal way (actual language translation) the cognition processes that mediate our relations to all texts, of bringing the information into a sphere of our pre-existing knowledge, of resisting the ‘otherness’ of the text. Fassler takes the bodily experience of being in strange new space and, totalising her material knowledge of it, later inverts the relative scale of her body and the space to ensure her dominance of it. Mini power-plays are contested through acts of drawing. So as to feel at home within the city, they are ensuring the city feels at home within them.